Demonstrate the use of the Raspberry Pi and a basic webcam, along with Motion and FFmpeg, to build low-cost dashboard video camera for your daily commute. 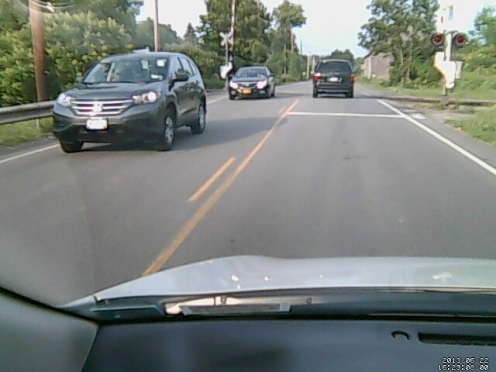 Most of us remember the proliferation of dashboard camera videos of the February 2013 meteor racing across the skies of Russia. This rare astronomical event was captured on many Russian motorist’s dashboard cameras. Due to the dangerous driving conditions in Russia, many drivers rely on dashboard cameras for insurance and legal purposes. In the United States, we are more use to seeing dashboard cameras used by law-enforcement. Who hasn’t seen those thrilling police videos of car crashes, drunk drivers, and traffic stops gone wrong.

Although driving in the United States is not as dangerous as in Russia, there is reason we can’t also use dashboard cameras. In case you are involved in an accident, you will have a video record of the event for your insurance company. If you witness an accident or other dangerous situation, your video may help law enforcement and other emergency responders. Maybe you just want to record a video diary of your next road trip.

A wide variety of dashboard video cameras, available for civilian vehicles, can be seen on Amazon’s website. They range in price and quality from less that $50 USD to well over $300 USD or more, depending on their features. In a popular earlier post, Remote Motion-Activated Web-Based Surveillance with Raspberry Pi, I demonstrated the use of the Raspberry Pi and a webcam, along with Motion and FFmpeg, to provide low-cost web-based, remote surveillance. There are many other uses for this combination of hardware and software, including as a dashboard video camera.

I’ve found two methods for capturing dashboard camera videos. The first and easiest method involves configuring Motion to use FFmpeg to create a video. FFmpeg creates a video from individual images (frames) taken at regular intervals while driving. The upside of the FFmpeg option, it gives you a quick ready-made video. The downside of FFmpeg option, your inability to fully control the high-level of video compression and high frame-rate (fps). This makes it hard to discern fine details when viewing the video.

Alternately, you can capture individual JPEG images and combine them using FFmpeg from the command line or using third-party movie-editing tools. The advantage of combining the images yourself, you have more control over the quality and frame-rate of the video. Altering the frame-rate, alters your perception of the speed of the vehicle recording the video. The only disadvantage of combining the images yourself, you have the extra steps involved to process the images into a video.

At one frame every two seconds (.5 fps), a 30 minute commute to work will generate 30 frames/minute x 30 minutes, or 900 jpeg images. At 640 x 480 pixels, depending on your jpeg compression ratio, that’s a lot of data to move around and crunch into a video. If you just want a basic record of your travels, use FFmpeg. If you want a higher-quality record of trip, maybe for a video-diary, combining the frames yourself is a better way to go.

Configuring Motion for a Dashboard Camera

The installation and setup of FFmpeg and Motion are covered in my earlier post so I won’t repeat that here. Below are several Motion settings I recommend starting with for use with a dashboard video camera. To configure Motion, open it’s configuration file, by entering the following command on your Raspberry Pi:

To use FFmpeg, the first method, find the ‘FFMPEG related options’ section of the configuration and locate ‘Use ffmpeg to encode a timelapse movie’. Enter a number for the ‘ffmpeg_timelapse’ setting. This is the rate at which images are captured and combined into a video. I suggest starting with 2 seconds. With a dashboard camera, you are trying to record important events as you drive. In as little as 2-3 seconds at 55 mph, you can miss a lot of action. Moving the setting down to 1 second will give more detail, but you will chew up a lot of disk space, if that is an issue for you. I would experiment with different values:

To use the ‘do-it-yourself’ FFmpeg method, locate the ‘Snapshots’ section. Find ‘Make automated snapshot every N seconds (default: 0 = disabled)’. Change the ‘snapshot_interval’ setting, using the same logic as the ‘ffmpeg_timelapse’ setting, above:

Irregardless of which method you choose (or use them both), you will want to tweak some more settings. In the ‘Text Display’ section, locate ‘Set to ‘preview’ will only draw a box in preview_shot pictures.’ Change the ‘locate’ setting to ‘off’. As shown in the video frame below, since you are moving in your vehicle most of the time, there is no sense turning on this option. Motion cannot differentiate between the highway zipping by the camera and the approaching vehicles. Everything is in motion to the camera, the box just gets in the way:

Optionally, I recommend turning on the time-stamp option. This is found right below the ‘locate’ setting. Especially in the event of an accident, you want an accurate time-stamp on the video or still images (make sure you Raspberry Pi’s time is correct): 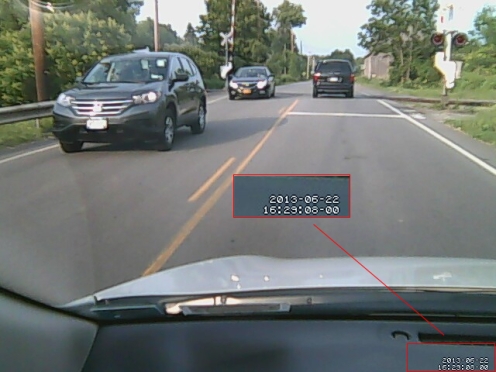 Starting with the largest, best quality images will ensure  the video quality is optimal. Start with a large size capture and reduce it only if you are having trouble capturing the video quickly enough. These settings are found in the ‘Capture device options’ section:

Similarly, I suggest starting with a low amount of jpeg compression to maximize quality and only lower if necessary. This setting is found in the ‘Image File Output’ section:

Once you have completed the configuration of Motion, restart Motion for the changes to take effect:

Since you will be powering on your Raspberry Pi in your vehicle, and may have no way to reach Motion from a command line, you will want Motion to start capturing video and images for you automatically at startup. To enable Motion (the motion daemon) on start-up, edit the /etc/default/motion file.

Change the ‘start_motion_daemon‘ setting to ‘yes’. If you decide to stop using the Raspberry Pi for capturing video, remember to disable this option. Motion will keep generating video and images, even without a camera connected, if the daemon process is running.

My start-up process is as follows:

Raspberry Pi in Vehicle with iPhone Preview of Dashboard Camera

Once I reach my destination, I copy the video and/or still image frames off the Raspberry Pi: 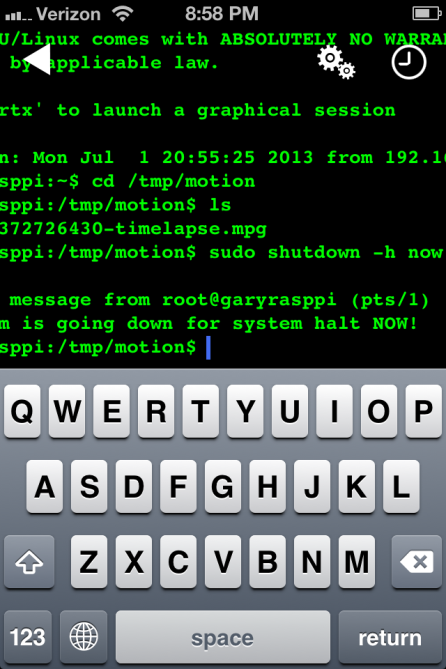 If you choose the second method for capturing dashboard camera videos, the easiest way to combine the individual dashboard camera images is by calling FFmpeg from the command line. To create the example #3 video, shown below, I ran two commands from a Linux Terminal prompt. The first command is a bash command to rename all the images to four-digit incremented numbers (‘0001.jpg’, ‘0002.jpg’, ‘0003.jpg’, etc.). This makes it easier to execute the second command. I found this script on stackoverflow. It requires Gawk (‘sudo apt-get install gawk’). If you are unsure about running this command, make a copy of the original images in case something goes wrong.

The second command is a basic FFmpeg command to combine the images into a 20 fps MPEG-4 video file. More information on running FFmpeg can be found on their website. There is a huge number of options available with FFmpeg from the command line. Running this command, FFmpeg processed 4,666 frames at 640 x 480 pixels in 233.30 seconds, outputting a 147.5 Mb MPEG-4 video file. 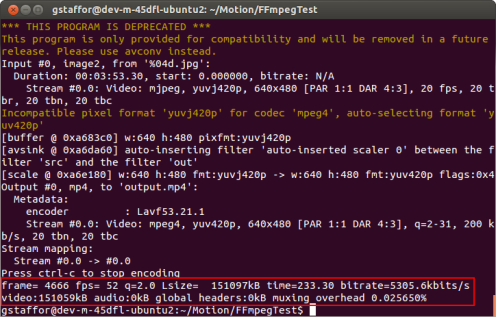 If you want to compress the video, you can chain a second FFmpeg command to the first one, similar to the one below. In my tests, this reduced the video size to 20-25% of the original uncompressed version.

If your images are to dark (early morning or overcast) or have a color-cast (poor webcam or tinted-windows), you can use programs like ImageMagick to adjust all the images as a single batch. In example #5 below, I pre-processed all the images prior to making the video. With one ImageMagick command, I adjusting their levels to make them lighter and less flat.

Using Windows MovieMaker was not my first choice, but I’ve had a tough time finding an equivalent Linux gui-based application. If you are going to create your own video from the still images, you need to be able to import and adjust thousands of images quickly and easily. I can import, create, and export a typical video of a 30 minute trip in 10 minutes with MovieMaker. With MovieMaker, you can also add titles, special effects, and so forth.

Below are a few dashboard video examples using a variety of methods. In the first two examples, I captured still images and created the FFmpeg video at the same time. You can compare quality of Method #1 to #2.

Renaming files in a folder to sequential numbers

This entry was posted on June 30, 2013, 11:15 pm and is filed under Bash Scripting, Raspberry Pi, Software Development. You can follow any responses to this entry through RSS 2.0. You can leave a response, or trackback from your own site.