Integrate the Spring Framework into your next Eclipse-based project using Apache Maven. Learn how to install, configure, and integrate these three leading Java development tools. All source code for this post is available on GitHub.

Although there is a growing adoption of Java EE 6 and CDI in recent years, Spring is still a well-entrenched, open-source framework for professional Java development. According to GoPivotal’s website, “The Spring Framework provides a comprehensive programming and configuration model for modern Java-based enterprise applications. Spring focuses on the ‘plumbing’ of enterprise applications so that teams can focus on application-level business logic, without unnecessary ties to specific deployment environments.”

Similar to Spring in terms of wide-spread adoption, Eclipse is leading Java IDE, competing with Oracle’s NetBeans and JetBrain’s IntelliJ. The use of Spring within Eclipse is very common. In the following post, I will demonstrate the ease of integrating Spring with Eclipse, using Maven.

Maven is a marketed as a project management tool, centralizing a project’s build, reporting and documentation. Conveniently, Maven is tightly integrated with Eclipse. We will use Maven for one of its best known features, dependency management. Maven will take care of downloading and managing the required Spring artifacts into our Eclipse-based project.

Note there are alternatives to integrating Spring into Eclipse, using Maven. You can download and add the Spring artifacts yourself, or go full-bore with GoPivotal’s Spring Tool Suite (STS). According to their website, STS is an Eclipse-based development environment, customized for developing Spring applications.

The steps covered in this post are as follows:

We can test our Maven installation by opening a new Command Prompt and issuing the ‘mvn -version’ command. The command should display the installed version of Maven, Maven home directory, and other required variables, like your machine’s current version of Java and its location. To learn other Maven commands, try ‘mvn -help’.

Installing Eclipse is even easier:

The latest version of Eclipse comes pre-loaded with the ‘M2E – Maven Integration for Eclipse’ plug-in. There is no additional software installs required to use Maven from within Eclipse. Eclipse also includes an embedded runtime version of Maven (currently 3.04). According to the Eclipse website wiki, the M2E plug-in uses the embedded runtime version of Maven when running Maven builder, importing projects and updating project configuration.

Although Eclipse contains an embedded version of Maven, we can configure M2E to use our own external Maven installation when launching Maven using Run as… -> M2 Maven actions. To configure Maven to use the version of Maven we just installed: 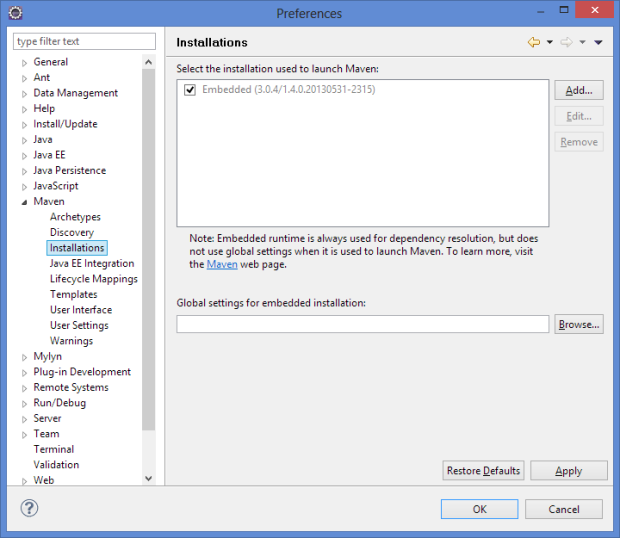 To show how to integrate Spring into a project using Maven, we will create a Maven Project in Eclipse using the Maven Quickstart Archetype template. The basic project will show the use of Spring Beans and an ApplicationContext IoC container. On a scale of 1 to 10, with 10 being the most complex Spring example, this project is barely a 1! However, it will demonstrate that Spring is working in Eclipse, with minimal effort thanks to Maven.

To create the project: 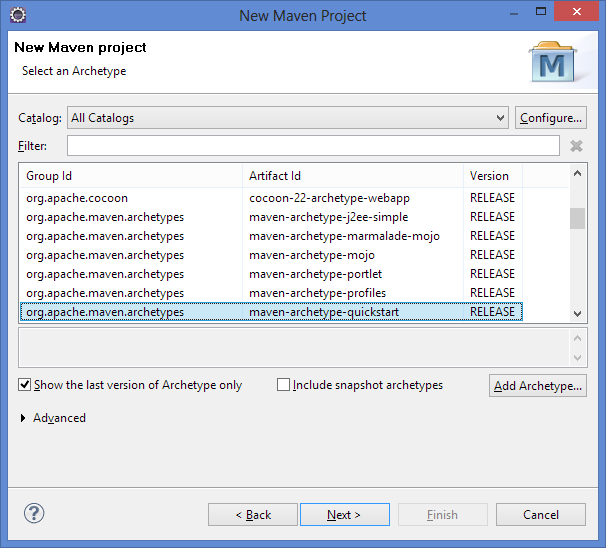 Once the Maven Quickstart project is created, we will add the required Spring dependencies using Maven: 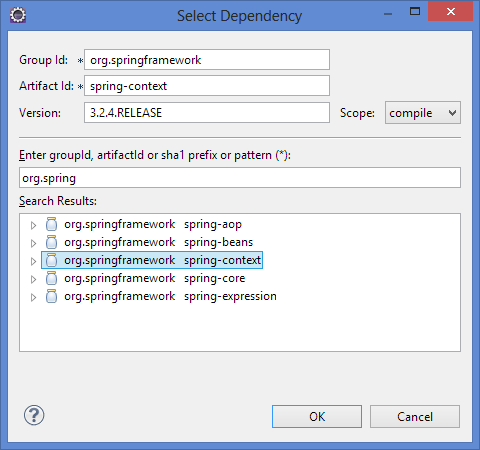 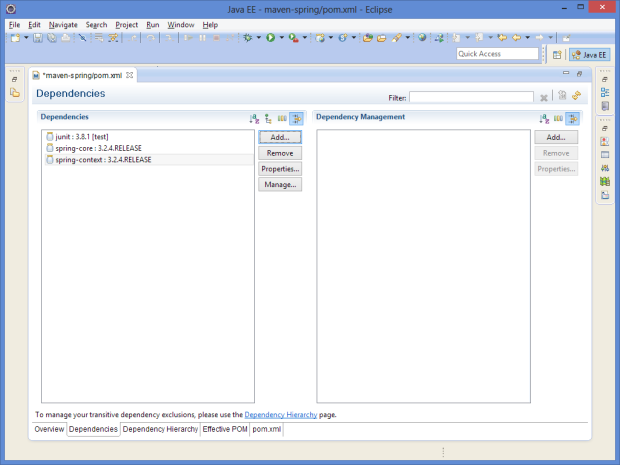 We now have a Maven-managed Eclipse project with our Spring dependencies included. Note the root of the file paths to the jar files in the Maven Dependencies project folder is the location of our Maven Repository. This is where all the dependent artifacts (jar files) are stored. In my case, the root is ‘C:\Users\{user}\.m2\repository’. The repository location is stored in Eclipse’s Maven User Setting’s Preferences (see below). 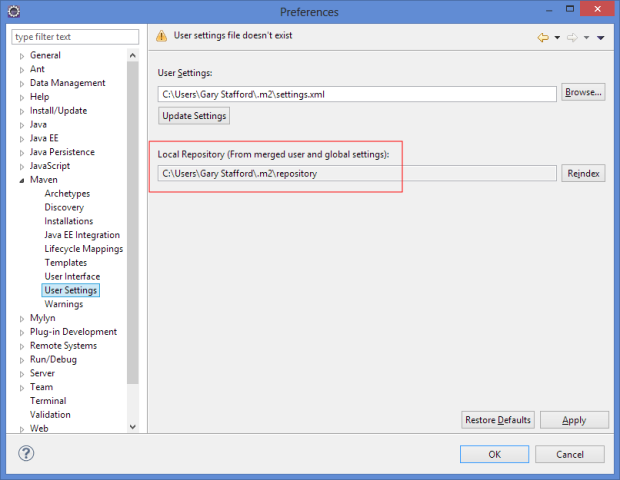 Next add the supplied Code to the project. We will add two new java classes and a Spring configuration file. We will replace the contents of main App class with our sample code. Steps are as follows:

The sample Spring application is based on vehicles. There are three Spring Beans defined in the xml-based Spring configuration file, representing three different vehicles. The main App class uses an ApplicationContext IoC Container to instantiate three Vehicle POJOs from the Spring Beans defined in the Beans.xml Spring configuration. The main class then instantiates an instance of the MaintainVehicle class, passes in the Vehicle objects and calls MaintainVehicle’s two methods.

If successful, the application will output a series of messages to the Console. The first few messages in red are Spring-related messages, signifying Spring is working. The next messages in black are output by the application. The messages show that the three Spring Beans are successfully instantiated and passed to the MaintainVehicle object, where it’s methods were called. If the application would only buy me that Silver Mercedes!

Running the Application from a Command Prompt

To run the java application from an external Command Prompt:

You should see the same messages output in Eclipse, earlier.