Deploying Spring Boot Apps to AWS with Netflix Nebula and Spinnaker: Part 1 of 2

As a DevOps Consultant, I regularly work with corporations whose global portfolios are in the thousands of applications. Indeed, some percentage of their applications are containerized, with less running in Production. However, a majority of those applications, even those built on modern, light-weight, distributed architectures, are still being deployed to bare-metal and virtualized public cloud and private data center infrastructure, for a variety of reasons.

Most Enterprise deployment tools are compatible with standard binary package types, including Debian (.deb) and Red Hat  (RPM) Package Manager (.rpm) packages for Linux, NuGet (.nupkg) packages for Windows, and Node Package Manager (.npm) and Bower for JavaScript. There are equivalent package types for other popular languages and formats, such as Go, Python, Ruby, SQL, Android, Objective-C, Swift, and Docker. Packages usually contain application metadata, a signature to ensure the integrity and/or authenticity², and a compressed payload.

One such enterprise with an extensive portfolio of both containerized and non-containerized applications is Netflix. To standardize their deployments to multiple types of cloud infrastructure, Netflix has developed several well-known open-source software (OSS) tools, including the Nebula Gradle plugins and Spinnaker. I discussed Spinnaker in my previous post, Managing Applications Across Multiple Kubernetes Environments with Istio, as an alternative to Jenkins for deploying container workloads to Kubernetes on Google (GKE).

As a leader in OSS, Netflix has documented their deployment process in several articles and presentations, including a post from 2016, ‘How We Build Code at Netflix.’ According to the article, the high-level process for deployment to Amazon EC2 instances involves the following steps:

Both the Nebula plugins and Spinnaker have been battle tested in Production by Netflix, as well as by many other industry leaders after Netflix open-sourced the tools in 2014 (Nebula) and 2015 (Spinnaker). Currently, there are approximately 20 Nebula Gradle plugins available on GitHub. Notable core-contributors in the development of Spinnaker include Google, Microsoft, Pivotal, Target, Veritas, and Oracle, to name a few. A sign of its success, Spinnaker currently has over 4,600 Stars on GitHub!

In Part Two, we will deploy a production-ready Spring Boot application, the Election microservice, to multiple Amazon EC2 instances, behind an Elastic Load Balancer (ELB). We will use a fully automated DevOps workflow. The build, test, package, bake, deploy process will be handled by the Netflix Nebula Gradle Linux Packaging Plugin, Jenkins, and Spinnaker. The high-level process will involve the following steps: 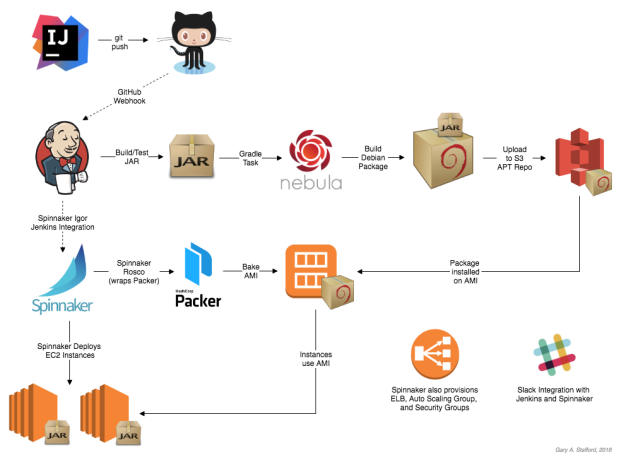 All opinions expressed in this post are my own and not necessarily the views of my current or past employers or their clients.