BLE and GATT for IoT: Getting Started with Bluetooth Low Energy and the Generic Attribute Profile Specification for IoT

According to Wikipedia, Bluetooth is a wireless technology standard used for exchanging data between fixed and mobile devices over short distances. Bluetooth Low Energy (Bluetooth LE or BLE) is a wireless personal area network (WPAN) technology designed and marketed by the Bluetooth Special Interest Group (Bluetooth SIG). According to the Bluetooth SIG, BLE is designed for very low power operation. BLE supports data rates from 125 Kb/s to 2 Mb/s, with multiple power levels from 1 milliwatt (mW) to 100 mW. Several key factors influence the effective range of a reliable Bluetooth connection, which can vary from a kilometer down to less than a meter. The newer generation Bluetooth 5 provides a theoretical 4x range improvement over Bluetooth 4.2, from approximately 200 feet (60 meters) to 800 feet (240 meters).

Wikipedia currently lists 36 definitions of Bluetooth profiles defined and adopted by the Bluetooth SIG, including the Generic Attribute Profile (GATT) Specification. According to the Bluetooth SIG, GATT is built on top of the Attribute Protocol (ATT) and establishes common operations and a framework for the data transported and stored by the ATT. GATT provides profile discovery and description services for the BLE protocol. It defines how ATT attributes are grouped together into sets to form services.

Given its low energy consumption and well-developed profiles, such as GATT, BLE is an ideal short-range wireless protocol for Internet of Things (IoT) devices, when compared to competing protocols, such as ZigBee, Bluetooth classic, and Wi-Fi. In this post, we will explore the use of BLE and the GATT specification to transmit environmental sensor data from an IoT Sensor to an IoT Gateway.

In this post, we will use an Arduino single-board microcontroller to serve as an IoT sensor, actually an array of sensors. The 3.3V AI-enabled Arduino Nano 33 BLE Sense board, released in August 2019, comes with the powerful nRF52840 processor from Nordic Semiconductors, a 32-bit ARM Cortex-M4 CPU running at 64 MHz, 1MB of CPU Flash Memory, 256KB of SRAM, and a NINA-B306 stand-alone Bluetooth 5 low energy module. 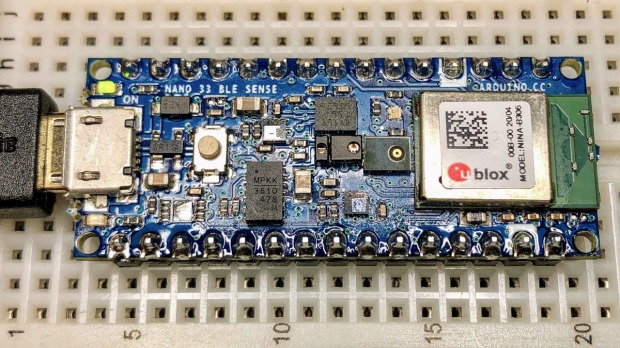 The Sense also contains an impressive array of embedded sensors:

The Sense is an excellent, low-cost single-board microcontroller for learning about collecting and transmitting IoT sensor data.

An IoT Gateway, according to TechTarget, is a physical device or software program that serves as the connection point between the Cloud and controllers, sensors, and intelligent devices. All data moving to the Cloud, or vice versa goes through the gateway, which can be either a dedicated hardware appliance or software program.

In this post, we will use a recent Raspberry Pi 3 Model B+ single-board computer (SBC), to serve as an IoT Gateway. This Raspberry Pi model features a 1.4GHz Cortex-A53 (ARMv8) 64-bit quad-core processor System on a Chip (SoC), 1GB LPDDR2 SDRAM, dual-band wireless LAN, Bluetooth 4.2 BLE, and Gigabit Ethernet. To follow along with the post, you could substitute the Raspberry Pi for any Linux-based machine to run the included sample Python script. 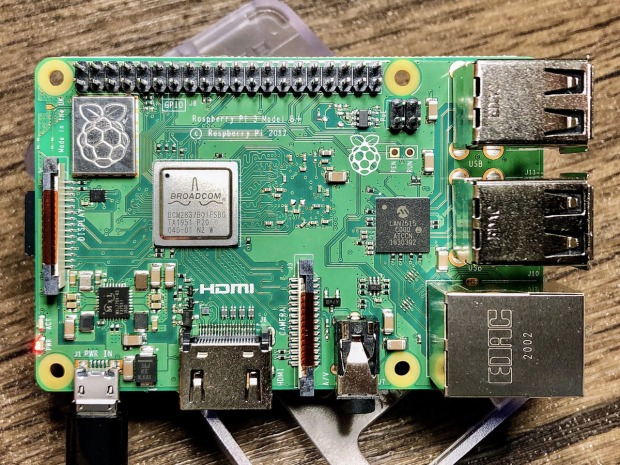 For those not familiar with Arduino, a sketch is the name that Arduino uses for a program. It is the unit of code that is uploaded into non-volatile flash memory and runs on an Arduino board. The Arduino language is a set of C/C++ functions. All standard C and C++ constructs supported by the avr-g++ compiler should work in Arduino.

For this post, the sketch, combo_sensor_ble.ino, contains all the code necessary to collect environmental sensor telemetry, including temperature, relative humidity, barometric pressure, and ambient light and RGB color. All code for this post, including the sketch, can be found on GitHub.

The sensor telemetry will be advertised by the Sense, over BLE, as a GATT Environmental Sensing Service (GATT Assigned Number 0x181A) with multiple GATT Characteristics. Each Characteristic represents a sensor reading and contains the most current sensor value(s), for example, Temperature (0x2A6E) or Humidity (0x2A6F).

Each GATT Characteristic defines how the data should be represented. To represent the data accurately, the sensor readings need to be modified. For example, using ArduinoHTS221 library, the temperature is captured with two decimal points of precision (e.g., 22.21 °C). However, the Temperature GATT Characteristic (0x2A6E) requires a signed 16-bit value (-32,768–32,767). To maintain precision, the captured value (e.g., 22.21 °C) is multiplied by 100 to convert it to an integer (e.g., 2221). The Raspberry Pi will then handle converting the value back to the original value with the correct precision.

The GATT specification has no current predefined Characteristic representing ambient light and RGB color. Therefore, I have created a custom Characteristic for the color values and assigned it a universally unique identifier (UUID).

According to the documentation, ambient light and RGB color are captured as 16-bit values (a range of 0–65,535). However, using the ArduinoAPDS9960 library, I have found the scale of the readings to be within a range of 0–4097. Without diving into the weeds, the maximum count (or saturation) value is variable. It can be calculated based upon the integration time and the size of the count register (e.g., 16-bits). The ADC integration time appears to be set to 10 ms in the library’s file, Arduino_APDS9960.cpp.

RGB values are typically represented as 8-bit color. We could convert the values to 8-bit before sending or handle it later on the Raspberry Pi IoT Gateway. For the sake of demonstration purposes versus data transfer efficiency, the sketch concatenates the 12-bit values together as a string (e.g., 4097,2811,1500,4097). The string will be converted from 12-bit to 8-bit on the Raspberry Pi (e.g., 255,175,93,255).

Before looking at the code running on the Raspberry Pi, we can use any number of mobile applications to preview and debug the Environmental Sensing service running on the Arduino and being advertised over BLE. A commonly recommended application is Nordic Semiconductor’s nRF Connect for Mobile, available on Google Play. I have found the Android version works better at correctly interpreting and displaying GATT Characteristic values than the iOS version of the app.

Below, we see a scan of my local vicinity for BLE devices being advertised, using the Android version of the nRF Connect mobile application. Note the BLE device, ArduinoNano33BLESense (indicated in red). Also, note the media access control address (MAC address) of that BLE device, in my case, d1:aa:89:0c:ee:82. The MAC address will be required later on the IoT Gateway.

Connecting to the device, we see three Services. The Environmental Sensing Service (indicated in red) contains the sensor readings. 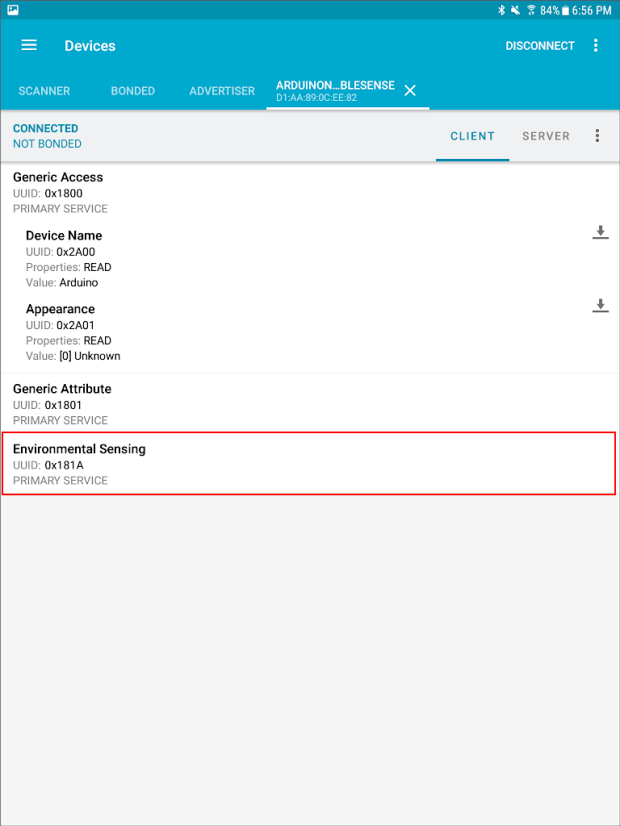 Drilling down into the Environmental Sensing Service (0x181A), we see the four expected Characteristics: Temperature (0x2A6E), Humidity (0x2A6F), Pressure (0x2A6D), and Unknown Characteristic (936b6a25-e503-4f7c-9349-bcc76c22b8c3). Since nRF Connect cannot recognize the color sensor reading as a registered GATT Characteristic (no GATT Assigned Number), it is displayed as an Unknown Characteristic. Whereas the temperature, humidity, and pressure values (indicated in red) are interpreted and displayed correctly, the color sensor reading is left as raw hexadecimal text (e.g., 30-2c-30-2c-30-2c-30-00 or 0,0,0,0).

These results indicate everything is working as expected.

To act as the BLE Client (aka central device), the Raspberry Pi runs a Python script. The script, rasppi_ble_receiver.py, uses the bluepy Python module for interfacing with BLE devices through Bluez, on Linux.

To run the Python script, execute the following command, substituting the MAC address argument for your own BLE device’s advertised MAC address.

Unlike the nRF Connect app, the bluepy Python module is not capable of correctly interpreting and displaying the GATT Characteristic values. Hence, the script takes the raw, incoming hexadecimal text from the Arduino and coerces it to the correct values. For example, a temperature reading must be transformed from bytes, b'\xb8\x08\x00\x00', to a byte array, bytearray(b'\xb8\x08\x00\x00'), then to an integer, 2232, then to a decimal, 22.32, and finally to the Fahrenheit scale, 72.18°F.

Sensor readings are retrieved from the BLE device every two seconds. In addition to displaying the numeric sensor readings, the Python script also displays a color swatch of the 8-bit RGB color, as well as a grayscale swatch representing the light intensity using the colr Python module. 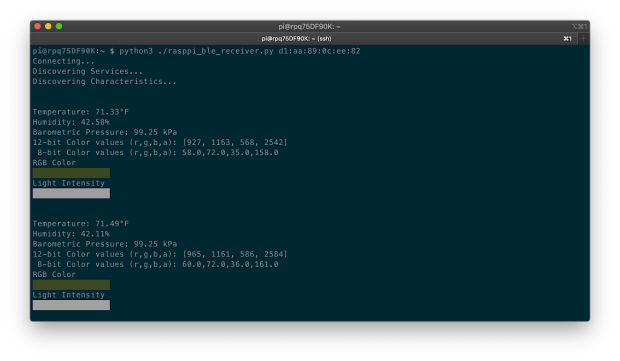 In this post, we explored the use of BLE and the GATT specification to transmit environmental sensor data from a peripheral device to a central device. Given its low energy consumption and well-developed profiles, such as GATT, Bluetooth Low Energy (BLE) is an ideal short-range wireless protocol for IoT devices.

This blog represents my own viewpoints and not of my employer, Amazon Web Services.