Setting Up the Nexus 7 for Development with ADT on Ubuntu

Posted by Gary A. Stafford in Software Development on February 17, 2013

Recently, I purchased a Google Nexus 7. Excited to being development with this Android 4.2 device, I first needed to prepare my development environment. The process of configuring my Ubuntu Linux-based laptop to debug directly on the Nexus 7 was fairly easy once I identified all necessary steps. I thought I would share my process for those who are trying to do the same. Note the following steps assume you already have Java installed on you development computer. Also, that your Nexus 7 is connected via USB.

1) Install ADT Bundle: Download and extract the Android Developer Tools (ADT) Bundle from http://developer.android.com/sdk/index.html. I installed the Linux 64-bit version for use on my Ubuntu 12.10 laptop. The bundle, according to the website, includes ‘the essential Android SDK components and a version of the Eclipse IDE with built-in ADT to streamline your Android app development.’

2) Install IA32 Libraries: Install the ia32 shared libraries using Synaptic Package Manager, or the following command, ‘sudo apt-get install ia32-libs’. I received some initial errors with ADT, until I found a post on Stack Overflow that suggested loading the libraries; they did the trick.

3) Configure Nexus 7 to Auto-Mount: To auto-mount the Nexus 7 on your computer, you need to make some changes to your computer’s system configuration. Follow this post to ‘configure your Ubuntu computer to directly access your Nexus 7 exported filesystem in MTP mode as soon as you plug it to a USB port.’, ‘http://bernaerts.dyndns.org/linux/247-ubuntu-automount-nexus7-mtp‘. It looked a bit intimidating at first, but it actually turned out to be pretty easy and only took a few minutes.

4) Setup ADT to Debug Nexus 7: To debug on the Nexus 7 from ADT via USB, according to this next post, ‘you need to add a udev rules file that contains a USB configuration for each type of device you want to use for development.’ Follow the steps in this post, ‘http://developer.android.com/tools/device.html‘ to create the rules file, similar to step 3.

5) Setup Nexus 7 for USB Debugging: The post mentioned in step 4 also discusses setting up you Nexus 7 to enable USB debugging. The post instructs you to ‘go to Settings > About phone and tap ‘Build number seven times. Return to the previous screen to find Developer options.’ From there, check the ‘USB debugging’ box. There are any more options you may wish to experiment with, later.

6) Update you Software: After these first five steps, I suggest updating your software and restarting your computer. Run the following command to make sure your system is up-to-date, ‘sudo apt-get update && sudo apt-get upgrade’. I always run this before and after any software installations to make sure my system is current.

After completing step 3, the Nexus 7 device should appear on your Launcher. However, it is not until steps 4 and 5 that it will appear in ADT.

Below is a simple demonstration of  debugging an Android application on the Nexus 7 from ADT, via USB. Although ADT allows you to configure an Android Virtual Device (AVD), direct debugging on the Nexus 7 is substantially faster. The Nexus 7 AVD emulation was incredibly slow, even on my 64-bit, Core i5 laptop. 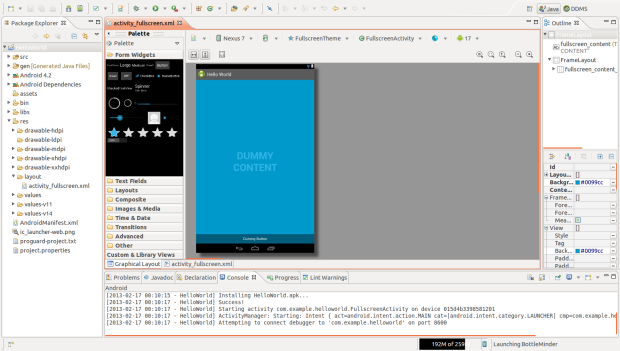