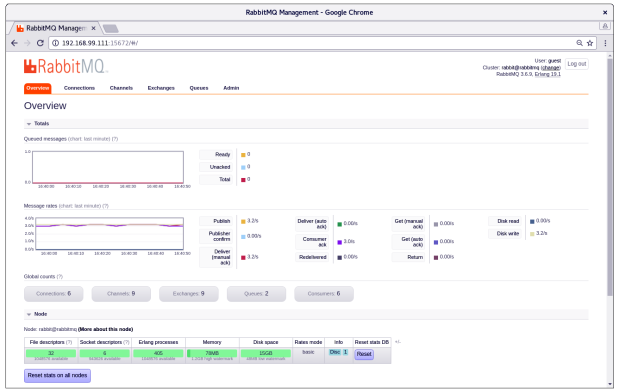 In this post, we will fully decouple our services using the distributed computing model of eventual consistency. More specifically, we will use a message-based, event-driven, loosely-coupled, eventually consistent architectural approach for communications between services.

Imagine, Service A, the Customer service, inserts a new customer record into its database. Based on that ‘customer created’ event, Service A publishes a message containing the new customer object, serialized to JSON, to the lightweight, persistent, New Customer message queue.

Service B, the Customer Onboarding service, a subscriber to the New Customer queue, consumes and deserializes Service A’s message. Service B may or may not perform a data transformation of the Customer object to its own Customer data model. Service B then inserts the new customer record into its own database.

So what does this apparent added complexity and duplication of data buy us? Consider the advantages. Service B, the Onboarding service, requires no knowledge of, or a dependency on, Service A, the Customer service. Still, Service B has a current record of all the customers that Service A maintains. Instead of making repeated and potentially costly RESTful HTTP calls or RPC message-based calls to or from Service A to Service B for new customers, Service B queries its database for a list of customers.

The value of eventual consistency increases factorially as you scale a distributed system. Imagine dozens of distinct microservices, many requiring data from other microservices. Further, imagine multiple instances of each of those services all running in parallel. Decoupling services from one another, through asynchronous forms of IPC, messaging, and event-driven eventual consistency greatly simplifies the software development lifecycle and operations.

In this post, we could use a few different architectural patterns to demonstrate message passing with RabbitMQ and Spring AMQP. They including Work Queues, Publish/Subscribe, Routing, or Topics. To keep things as simple as possible, we will have a single Producer, publish messages to a single durable and persistent message queue. We will have a single Subscriber, a Consumer, consume the messages from that queue. We focus on a single type of event message.

To demonstrate Spring AMQP-based messaging with RabbitMQ, we will use a reference set of three Spring Boot microservices. The Election Service, Candidate Service, and Voter Service are all backed by MongoDB. The services and MongoDB, along with RabbitMQ and Voter API Gateway, are all part of the Voter API.

The Voter API Gateway, based on HAProxy, serves as a common entry point to all three services, as well as serving as a reverse proxy and load balancer. The API Gateway provides round-robin load-balanced access to multiple instances of each service.

For this post, you only need to clone the Voter Service repository.

All components, including the Spring Boot services, MongoDB, RabbitMQ, API Gateway, and the Web Client, are individually deployed using Docker. Each component is publicly available as a Docker Image, on Docker Hub. The Voter Service repository contains scripts to deploy the entire set of Dockerized components, locally. The repository also contains optional scripts to provision a Docker Swarm, using Docker’s newer swarm mode, and deploy the components. We will only deploy the services locally for this post.

To clone and deploy the components locally, including the Spring Boot services, MongoDB, RabbitMQ, and the API Gateway, execute the following commands. If this is your first time running the commands, it may take a few minutes for your system to download all the required Docker Images from Docker Hub.

If everything was deployed successfully, you should observe six running Docker containers, similar to the output, below.

The Voter Service, Election Service, and Candidate Service GitHub repositories each contain README files, which detail all the API endpoints each service exposes, and how to call them.

The Candidate service manages electoral candidates, their political affiliation, and the election in which they are running. Like the Voter service, the Candidate service also has a /simulation endpoint. The service will create a list of candidates based on the 2012 and 2016 US Presidential Elections. The simulation capability of the service saves us the burden of inputting candidates for this demonstration.

Calling the new /voter/simulation/db/{election} endpoint and providing a specific election, prompts the Voter service to query its own MongoDB database for a list of candidates.

But wait, where did the candidates come from? The Voter service didn’t call the Candidate service? The answer is message-based eventual consistency. Whenever a new candidate is created, using a REST HTTP POST request to the Candidate service’s /candidate/candidates endpoint, a Spring Data Rest Repository Event Handler responds. Responding to the candidate created event, the event handler publishes a message, containing a serialized JSON representation of the new candidate object, to a durable and persistent RabbitMQ queue.

When /voter/simulation/db/{election} endpoint is called, the Voter service queries its voters database for a list of candidates. They Voter service then proceeds to generate a random number of votes for each candidate in the list. Finally, identical to the previous two examples, each new vote object (MongoDB document) is written back to the vote collection in the Voter service’s voters  database.

We will not review the REST HTTP or RPC IPC code in this post. It was covered in detail, in the previous post. Instead, we will explore the new code required for eventual consistency.

And here, the abridged configuration class for the Candidate service.

With our dependencies and configuration in place, we will define the CandidateEventHandler class. This class is annotated with the Spring Data Rest @RepositoryEventHandler and Spring’s @Component. The @Component annotation ensures the event handler is registered.

The class contains the handleCandidateSave method, which is annotated with the Spring Data Rest @HandleAfterCreate. The event handler acts on the Candidate object, which is the first parameter in the method signature.

Responding to the candidate created event, the event handler publishes a message, containing a serialized JSON representation of the new candidate object, to the candidates.queue queue. This was the queue we configured earlier.

Next, we let’s switch to the Voter service’s CandidateListService class. Below is an abridged version of the class with two new methods. First, the getCandidateMessage method listens to the candidates.queue queue. This was the queue we configured earlier. The method is annotated with theSpring AMQP Rabbit @RabbitListener annotation.

The second method, getCandidatesQueueDb, retrieves the candidates from the Voter service’s database. The method makes use of the Spring Data MongoDB Aggregation package to return a list of candidates from MongoDB.

The easiest way to observe what is happening with the messages is using the RabbitMQ Management Console. To access the console, point your web browser to localhost, on port 15672. The default login credentials for the console are guest/guest. As you successfully produce and consume messages with RabbitMQ, you should see activity on the Overview tab. 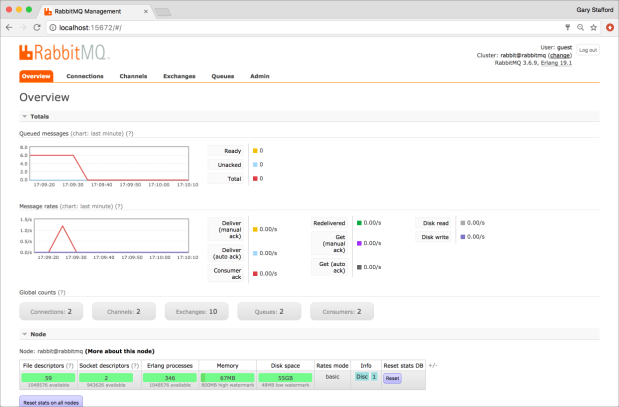 Recall we said the queue, in this example, was durable. That means messages will survive the RabbitMQ broker stopping and starting. In the below view of the RabbitMQ Management Console, note the six messages persisted in memory. The Candidate service produced the messages in response to six new candidates being created. However, the Voter service was not running, and therefore, could not consume the messages. In addition, the RabbitMQ server was restarted, after receiving the candidate messages. The messages were persisted and still present in the queue after the successful reboot of RabbitMQ.

In addition to using the RabbitMQ Management Console, we may obverse communications between the two services by looking at the Voter and Candidate service’s logs. I have grabbed a snippet of both service’s logs and added a few comments to show where different processes are being executed.

First the Candidate service logs. We observe a REST HTTP POST request containing a new candidate. We then observe the creation of the new candidate object in the Candidate service’s database, followed by the event handler publishing a message on the queue. Finally, we observe the response is returned in reply to the initial REST HTTP POST request.

The post demonstrated a simple example of message-based, event-driven eventual consistency. In an actual Production environment, there are a few things that must be considered.

In this post, using eventual consistency, we successfully decoupled our two microservices and achieved asynchronous inter-process communications. Adopting a message-based, event-driven, loosely-coupled architecture, wherever possible, in combination with REST HTTP when it makes sense, will improve the overall manageability and scalability of a microservices-based platform.

All opinions in this post are my own and not necessarily the views of my current employer or their clients.

This entry was posted on May 15, 2017, 12:01 pm and is filed under DevOps, Java Development, Software Development. You can follow any responses to this entry through RSS 2.0. You can leave a response, or trackback from your own site.